Measure the consumed/produced energy with Domoticz

We'd like to describe a possible solution to measure the energy consumed and produced by the building using Domoticz + ESP8266 + Eastron SDM230 (monophase) or SDM630 (triphase) meter.

With the information about the current power usage/production it's possible to manage loads (or heating/cooling system) in the right way, maximizing the used energy from photovoltaic system. 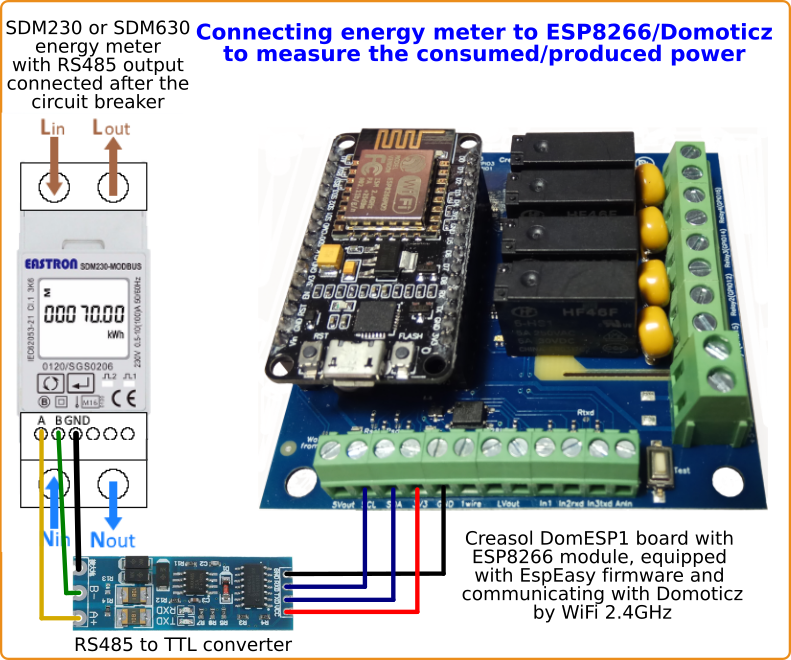 The energy meter is connected between the first circuit breaker and the circuit breakers used for each zone: in this way it measure the used/produced power globally.

Please choose the energy meter model that integrates the RS485/Modbus interface, so it's possible to connect to ESP8266 board through a RS485 to TLL converter so ESPEasy can read power (positive if used, negative if produced), voltage and other variables.

that shows the instant power shown on the web browser (Domoticz panel) every 2 seconds.

Script for domoticz to manage the house power: in the winter, it activates electric heaters automatically, when power production (from photovoltaic?) is greater than electric heater power.

It also send an alert when power usage is above the max limit since long time, to prevent disconnections from the electric grid.

Lua scripts and configuration, used to manage the heat pump ( to be placed in domoticz/scripts/lua )