This LUA script can be used to add the following functions to Domoticz: 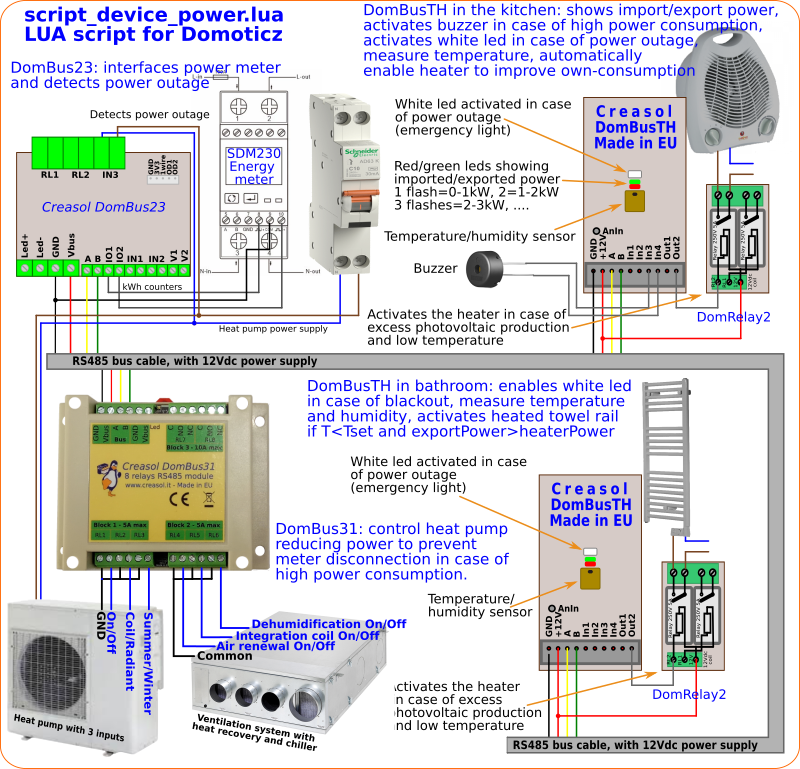 Although it seems a bit complicted, this diagram can be divided in the following parts:

In the block diagram above the Eastron SDM230 power meter is used, but any power meter with pulse outputs for import/export energy can be used for this purpose.

The result that we want to achieve is to have two devices, in Domoticz, showing the imported and exported power.

In case of using a DomBus RS485 module to interface the energy meter, this is following procedure to configure two DomBus input ports as counters:

Domoticz needs up to 5 minutes before updating the energy counter correctly.

Use any device you prefer to detect if electricity from grid is available or not. In the diagram above, the voltage from a circuit breaker (heat pump circuit breaker, in the example) is sensed by a optoisolated input.

If a wired-bus is used to connect domotic modules, and this is supplied by a backup-battery power supply (13.6V power supply + lead acid battery, or a UPS), it's possible to connect LEDs to the domotic modules and turn on LEDs in case of power outage (as emergency lights). The same can be done on battery-powered devices that have enough energy capacity. 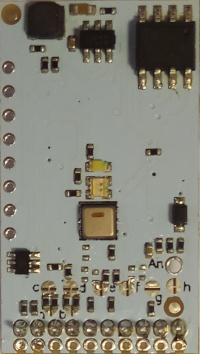 Maybe the following function is available only on DomBusTH module, that has a special feature so LEDs can be configured in Domoticz as Selector Switch where 0 means OFF, 10=1 pulse, 20=2 pulses, 30=3 pulses, 40=4 pulses, and so on. Check the

video that shows DomBusTH module programmed to show the ventilation status on white led and current exported power on green led (and imported power on red led, of course)!

In this case it's possible to get red LED flashes a number of times corresponding to the current imported power, and similarly green LED flashing a number of times corresponding to the exported power. This can be useful in the kitchen to check the available power from renewable sources, or verify that we're not consuming more power than what is permitted by the electricity meter, without the need to mount large display or tablet to show the current power.

The script has 2 thresholds above which the electric power must be reduced within a certain time. In Italy, the electricity grid permits to get

If there is nothing else to switch off and imported power level is above one of these thresholds, script is able to activate buzzers, leds, sirens or other systems to notify the building people that they have to reduce power consumption. Also, it can send a notification by Telegram.

The following list of commands can be just copied and pasted in linux shell to download and install the scripts. For those who use Windows operating system, installation is quite simple: just download and copy 4 files in the domoticz/scripts/lua directory, and edit those files to match the own configuration. Files are available in https://github.com/CreasolTech/domoticz_lua_scripts

1. Send notification when consumed power is above a threshold (to avoid power outage)

2. Enabe/Disable electric heaters or other appliances, to reduced power consumption from the electric grid

3. Emergency lights: turn ON some LED devices in case of power outage, and turn off when power is restored

To install the script, type the following commands from the Linux shell, ignoring the comments (starting with #). If you don't know how to do, search the web how to connect to your Linux device using putty or another ssh client.