This page shows how to make a new fresh image with Raspbian+Domoticz+firewall+backup.

If you prefer to purchase a high quality SD already programmed, visit our shop.

Writing an image for Raspberry

We're proposing a quick solution to install a pre-configured image of Raspbian for Raspberry PI3 or PI4, completed with latest Domoticz software and configured to preserve MicroSD flash device (flash cannot be safely written more than 10000 times) and exporting a weekly backup that can easily restored in case of problems.

This image was tested on both Raspberry PI3 and Raspberry PI4 hardware, and uses the last Raspbian Buster distribution.

Flashing this image in a microSD, you are immediately ready to configure your Domoticz devices from the web interface.

Extracting the image to a microSD

Connect the microSD to a Linux computer or to Raspberry (using a USB memory reader).
Run the following commands to download the raspberry image from our website and extract it on the SD. Windows users can connect to their raspberry console using putty

This is the output of raspberry_domoticz.sh script, in bold the text written by the user:

mmcblk0p2  (write the name of device corresponding with root filesystem, where the image was downloaded, or the device containing the image, for example a usb drive)

sda  (disk device connected to raspberry or PC, with the microSD card)

If you want to translate texts of raspberry_domoticz.sh in a different language, just modify the script adding the corresponding lines text[LANG,NUMBER] : it's very intuitive. Please send to This email address is being protected from spambots. You need JavaScript enabled to view it. the modified script and your name, so we can publish your improvements.

It's recommended to change these default passwords!!

Starting raspberry with this image, it will get network configuration from your DHCP server (router), so you can connect it by the browser at url like http://192.168.1.123:8080 (check your dhcp server to get the IP address assigned to raspberry, or do a network scan of your LAN). If you connect raspberry from 192.168.*.* or 172.16.*.* or 10.*.*.* networks, no authentication is required.
Also, ssh service is enabled, so you can enter secure shell (using ssh, putty or any other ssh client) as user pi or root.

How to create an image from Raspberry SD

We've written the bash script raspberry_domoticz.sh (see above) that permits to save a copy of Raspberry memory to a USB drive, and also create new SD with the content of a saved image.

This is useful because:

Unfortunally, this system does not work in Windows, but... who are still using windows at these days? Everything is moving to Linux! Android is Linux. Rasbian is Linux. Your routers, access points, TV most probably use Linux operating system! ;-)

ps ax |grep domoticz  : lists all active processes showing only the ones with name domoticz

How to configure raspberry GPIOs

With this raspbian image, GPIOs can be configured editing /etc/rc.local file and setting the needed gpio as out (if output), in if input, or both if bidirectional.

After edited, type /etc/rc.local to reload the script.

How to update the Creasol DomBus plugin to the latest version?

How to configure a static IP for the Raspbian ethernet interface?

and save with ctrl-x.

Assure that LAN cable is connected to raspberry, and that a DHCP server can assign IP parameters to it.

There's a firewall script installed, /usr/local/sbin/myfirewallpi.sh , that needs that eth0 interface is already configured by DHCP or static IP.

How much does Raspberry PI4 consumes?

As home automation systems were borned to reduce building environmental footprint, it's important to know if a Raspberry is a good hardware for a domotic controller or not, in terms of CPU power, stability, and also energy consumption.

This is the hardware under test, a Raspberry PI4 with 1 GB of ram, connected to LAN and supplied by a DC power supply at 5V 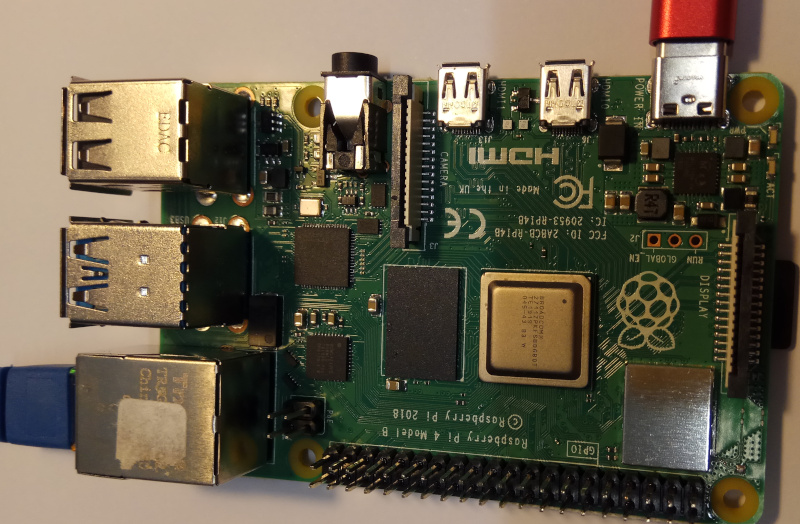 Below, the value of current and voltage with Raspbian O/S measured when
1. at the left, with no any load (very low CPU usage), raspberry power consumption = 5V*0.42A=2.1W normal

How to enable the IP number that you want to access your raspberry/domoticz from outside?

Edit the firewall script with command nano /usr/local/sbin/myfirewallpi.sh and modify the ADMIN_SOURCE variable adding the IP addresses (or networks) you want to enable:

Save file with CTRL-s and CTRL-x , then run the script typing /usr/local/sbin/myfirewallpi.sh

How to enable incoming connections to the web server in Raspberry?

Modify the firewall script with command nano /usr/local/sbin/myfirewallpi.sh , and add port 80 (http) or 443 (https) to the variable TCP_SERVICES_IN_wan

then save script (CTRL-s and CTRL-x) and run the firewall script with command /usr/local/sbin/myfirewallpi.sh

For any questions, please check the web and/or write email to linux @ creasol.it and we'll try to put the answer to your questions on this section.

Need help about DomBus protocol and devices? join the DomBus channel on Telegram!